This is my single favourite playlist in the whole of youtube – a series of short films of Japanese craftspeople fixing various treasured things. No subtitles, no translations, but absolutely perfect and calming. 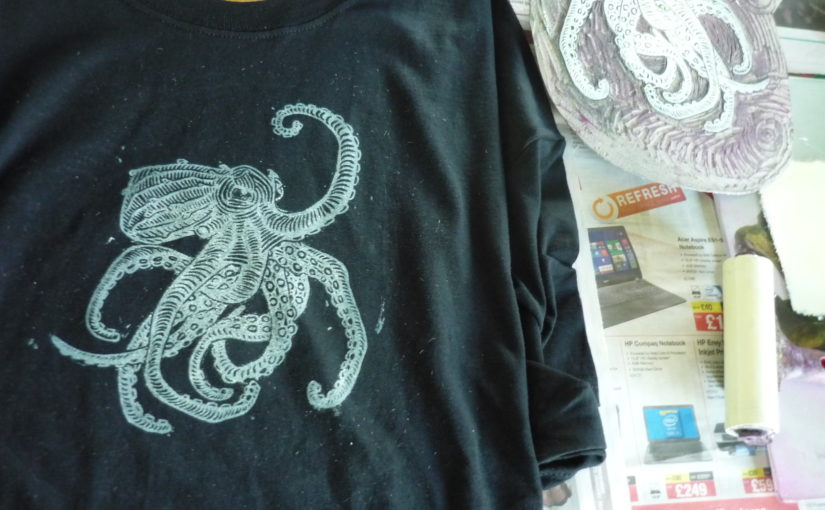 I’ve been making lino cuts on and off for twelve years now – it’s a very satisfying medium, as the results of your drawing, cutting and inking all come out in one big reveal. Here’s some tips on what I’ve found are the most effective ways to turn out good prints at home.

Lots of people swear by heating your lino – maybe the average lino is a little harder than my supply, but if you store it in a warm room, or have a table set up to catch a sunbeam, you should be good to go. If it’s cold inside and the blade is absolutely refusing to dig in, then yes, absolutely, use your oven on the lowest setting. Give it five minutes, and see how you get on. If it gets too warm, it will start tearing instead of cutting and your details will just crumble. Use short, careful strokes, like you’re slowly writing a word, instead of longer ones like you’re using a knife, and you’ll be much less likely to slip. Always make sure your fingers aren’t in front of the blade!

A toughened glass chopping board is my surface of choice for rolling out ink.

Your printing material will make a big difference as to how your prints will come out (I am writing about oil-based inks here). Cotton t-shirts are by far the easiest surface to ink onto, as their soft, slightly fuzzy surface grips the ink amazingly well. As a rule, softer papers like newsprint or printer paper take ink much more dependably than artist’s papers, which tend to slide around a heartbreaking amount when hand-pressing. My advice for paper prints is to try and find a local college or print studio that has a relief press and will let you use it, as it is just about impossible to get clean prints on thick paper if all you have to press with is a big spoon. That same spoon, or a big book, are all you need for printing on fabric though – for the most consistent results, I use a wool felt mat as a base, with a newspaper cover, as this lets the lino and the printing surface join together evenly. Some people advise glueing your lino to a plywood sheet, but unless the sheet and your table are exactly flat you’ll get spots that just won’t print evenly.

Clean-up is important. For oil-based inks, stay away from white spirit – the best solvent is cooking oil. Use cotton rags, because paper towels mush up and fill in all your glorious fine details you slaved over. Have some extra newspaper on hand, and make some quick newspaper prints to soak up the extra ink – wipe off your lino and get the excess off your roller too, it means there’s much less scrubbing to do.

Lastly: drying. If you have a sunny, windless day, go right ahead and hang your prints outside to speed things up. Otherwise, leave them in the warmest, most out-of-the-way spot you can find – if you’re in a mad hurry, some very careful ovening will do the trick.

April 4th – SPQR, Mary Beard: A very strong contender for non-fiction book of the year, this is a beautifully written history of Rome that is soaked in detail and characterisation.

April 21st – City Stained Red, Sam Sykes: This is a great fantasy story revolving around a team of adventurers who mostly can’t stand each other, with hilarious/blood-stained consequences

April 25th – The Long Way to a Small Angry Planet, Becky Chambers: I absolutely fell in love with the characters, the setting and the story. Maybe the best fiction of the year.

Also May 15th – Born to Run, Christopher McDougall: In any other year this would have run away as the best non-fiction book, and if my spine still let me run I’d call it life-changing.

June 2nd – Hyperion, Dan Simmons: I started this thinking it looked like a possibly-overlong, needlessly complicated book. Oh, cover blurb, you lied to me so! Hyperion is delightful, a genuinely surprising pilgrim’s tale that twists a hundred strands intimate and stellar into a delicious whole, and wraps it up with a strong contender for the best final page in all of fiction.

June 17th – Kitchen Confidential, Anthony Bourdain: Yes, I read this after his death, but god, what a story! The absolute passion here is breathtaking, and even with a question mark over whether it’s true or not it’s a great read.

I went on a reading frenzy last year, chasing up recommendations from Warren Ellis and various authors I follow on twitter – most of whom I hadn’t read before, and that’s the big joyous thing about booktwitter – and generally burning a serious groove in my library card. This is also the first year I’ve tried keeping a diary, so I have some recommendations I’m going to throw at you in four handy instalments. Part one in a slow series:

Jan 3rd: An Instance of the Fingerpost, Iain Pears. An English Rashomon, says my diary, and it should know, right? Murky goings-on where no-one is what they seem in 1663 England. I don’t usually go for historical fiction, but this was definitely worth making an exception for.

Jan 28th: Angelmaker, Nick Harkaway. I read his debut, The Gone-away World, last year, and oh can he tell a story. Inventive and fun, with solid, heartfelt characters, it’s an unembarrassed escapade of the very best kind.

Jan 31st: You, Grossman. An RPG as a game novel. I don’t know if it’s one for the ages, but a good read that does a lot with the party-of-four mechanic.

Feb 5th: Artemis, Mark Watney. Not as well-received as The Martian, because how the hell would anyone top that, but there’s enough in here that works for it to be a solid read.

Feb 21st: Traffic, Vanderbilt. One of my particular pleasures is non-fiction that shows you a new way of looking at something mundane – this here takes us through a carefully-researched look at traffic, where it comes from and different ways to manage it, which sounds entirely wrong as subject matter until Vanderbilt describes the entirely counter-intuitive ways you can speed people up and slow them down.

March 3rd: Stormy Weather, Carl Hiaasen. Hiaasen is what I might have called a guilty pleasure back when I gave a damn – effortless to read, but with a surprising amount going on under the hood. I have a suspicion that Hiaasen and Elmore Leonard are the same person, depending on what mood he wakes up in…

March 10th: Bad Monkey, Carl Hiaasen. I also suspect that Hiaasen has roughly the same plot in each book. I have a stronger suspicion that when it’s this good I don’t care.

March 16th: Tigerman, Nick Harkaway. Back to Harkaway, this time with a superhero and the last dribbled-out days of empire in the mix.

March 21st: Annihilation, Jeff Vandermeer. I read this just before I watched the year’s most beautiful film, I would say the two complement each other very nicely.

Well that’s been a hell of a year eh?

I started it needing back surgery, and then I got the surgery, and the rest of the year, by comparison, has just been god-damn sunshine and puppies for this fleshbag. The wider world has been busy either going to hell or driving itself off a cliff-edge, but for me myself personally, carving my own little groove and going about my days, this year has gone better than I could have hoped. I’ve got a fistful of projects carrying over into this shiny bright new year, along with a little nugget of momentum, and I’ll be hell of an interested to see how they turn out, which is aaaaace.

I read 48 books last year, and I got seriously lucky – just about all of them were genuinely, no-kidding good. More on that later, because I started a what-I’ve-read blogpost back in September but I’ve been (humblebrag) neck-deep in work and commissions since then, so I might get around to finishing it before March, right? Anyways, I’ve got some good music and some excellent whisky here right now, so take care of yourselves, concentrate your will, line up some good songs and gather your bravery, because we’ll get through this next one even if it’s by the skin of our fingertips.

I realised not that long ago that one of my hobbies these days is collecting ‘Rules for writing’ from various authors. One of the first I tried was Stephen King’s On Writing, summarised in the link there, and the core point of that entire book is this:

Writing is a job, so have a schedule and put the hours in.

This is what they all, in the end, boil down to. There might be some fluff about craft and technique, or even about not doing scary things out the window, but a vast number of authors have spent a huge amount of words trying to communicate… that writing is a job.

Over the past few months I’ve upped my newsletter intake, with my gateway drug being Warren Ellis’ Sunday special Orbital Operations. That being the keystone, the other standouts are:
Austin Kleon: writing and artistic motivation, mixed in with that week’s discoveries.
Chuck Wendig chums out a rich trail of thoughts, author guest spots and writer’s craft. New posts at, frankly, a terrifying rate compared to everyone else in this list.
Saving the most beautiful and satisfying till last, Disturbances by Jay Owens, aka Hautepop, is an on-going series of long reads on the subject of dust. No, I’m not kidding. Go on, they’re perhaps the best short non-fiction I’ve read in the last couple of years. Dedicated, thorough, absorbing.